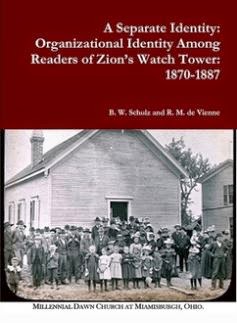 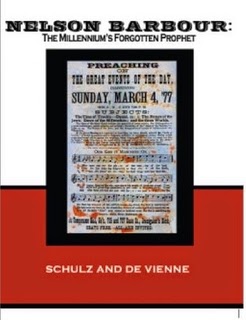 A Separate Identity by Schulz and de Vienne (Hey, that's me!)

So far there are three really nice reviews out there. Two are on lulu and one on a controversialist site. Here they are:

Histories of the early movement tend to fall into two extremes, hagiography and polemic. This is because they are usually written from a range of widely differing theological perspectives, not that of a strict historian. Additionally, they tend to concentrate on the figure of Charles Taze Russell to the virtual exclusion of his contemporaries. This volume redresses that balance, written by two historians with an almost fanatical attention to detail as demonstrated by the voluminous footnotes. They appear to strive hard to keep any personal views out of the picture and go where the evidence takes them. The result is a detailed, even-handed history of Russell and his contemporaries - crucially in the context of their times. Many writers on this subject seem to try and graft 21st century attitudes onto 19th century people, not recognising that the beliefs of Russell and others in the second half of the nineteenth century were often far more mainstream than a modern reader might imagine. Even if one has no direct interest in Russell and what came later from his ministry, several groups today count people like Henry Grew, George Storrs, and John Thomas in their antecedents. These men all feature in this book and, certainly in the case of , you are unlikely to find as much detailed information on his life and work anywhere else. The writers have previously published a volume on Nelson Barbour: The Millennium’s Forgotten Prophet. That too is well worth reading, although the present volume (that takes history up to 1879) is a stand-alone book.

This is the definitive history of the early years of the Watch Tower Movement. Because as stated in the "Introduction" no one had ever before "produced anything approaching a reasonably well-researched and accurate account of the 's early years". That is until now. Schulz and de Vienne with the help of others named and unnamed have combed a vast array of resources to produce this historical gem. The 380 pages of volume one cover the period up until the split with N. H. Barbour in May 1879. Most histories cover this period in only a few paragraphs. So what we have here is a tremendous amount of original research including: biographical and historical information found in the original Watch Tower volumes from 1879 - 1916 which had not been collected together in one place until now, information gleaned from other Jehovah's Witnesses and Bible Student publications, newspaper interviews that Russell and others gave, some that were given even before the Watch Tower was started. The authors cast a wide net including newspaper archives, family archives of persons named in letters to the editor in the Watch Tower magazine, letters to the editor that C. T. Russell and others wrote to other religious magazines, church archives, college archives, census records, passport and numerous other records too varied to mention. Another highlight of this in-depth history is the extensive biographies it gives of persons connected to C. T. Russell. For example you may have seen or heard the names of George Storrs and George Stetson in other histories as persons who were of help to Russell. But until now if you know them only from those other histories you have no idea who they really were or how exactly they helped Russell in his studies. The authors not only tell you the history of the early Watch Tower period but also how they know it and by means of numerous footnotes exactly where the information comes from so that it can be verified if you wish to follow in their footsteps. There are also numerous pictures of persons, places, and artifacts connected to early history. Some that have never been in print before. It is neither a polemic or an apology just well-researched history. There is no other early history that compares to this.

The book is an incredibly detailed history of Russell’s early years and his antecedents. Chapter one tells things about Russell’s early years never published elsewhere. I found them revealing. The details present a picture of Russell different from that I had formed. The last section of that chapter gives details about Russell’s businesses that I did not know. I don’t think very many know them either. Music publishing? A furniture store? Stock market investments? Who knew?


The next two chapters define Russell’s relationship to Adventists and Age-to-Come believers. You may think you know what this is all about, but let me tell you, you don’t. There are persons in this story long ignored by those who write about Russell. I’m impressed by the detail and the depth of research. Wendell, who most writers present simply as an Adventist preacher, is given a biography. His sermons in Allegheny and elsewhere are examined. (There is, surprisingly, a record of that.) Stetson’s last years and his non-Adventist beliefs are explored. There’s a real story in that. Again, it is different from what is usually said. turns into a different person than I expected. Others you may not have heard of are introduced. John T. Ongley, a One Faith evangelist, George Darby Clowes, an ex-Methodist preacher and others are profiled and their place in Watch Tower History restored.


If the Watchtower had ever published something like this, I wouldn’t see them as the dishonest, manipulative, controlling organization it seems to be. The Proclaimers book has what? Two sentences about Stetson? Schulz and de Vienne devote half a chapter to him, his writing and his beliefs. They take readers to private letters, obscure articles, and use them to build a well-researched, connected story. They hide nothing.


I found chapter four especially interesting. Chapter four discusses the bible study group founded by Russell and his associates. To get to his point, the authors have trashed the work of a number of authors. Some of that is funny. They call Zydeck’s book “fantasy fiction” and tell you exactly what’s wrong with his claims. (Contrived, fabricated) Others get the same treatment. I’ve been pursuing Watchtower history since the 1950s. My reaction to this was “about bloody time.”


Chapter four is the title chapter. It traces topic by topic the development of Russell’s theology. They tell you from whom and from where Russell got his belief system. You think his theology was Adventist? Think again. They cite the books, articles and letters of those with whom Russell associated. Most interesting here is a section on pyramid belief: They trace the origins of Pyramidology of course. They correct the claims of a few well-know anti-cult writers. They tell you who believed the theory. That was new to me. I did not know that Clarence Larkin, the Baptist expositor, and T. de Witt Talmage, the then famous preacher both believed similarly.


The remaining chapters consider Russell’s association with Barbour. Biographies are restored. Benjamin Wallace Keith’s biography is fascinating. J. C. Sunderlin was an opium addict, made such by pain killers he was prescribed for Civil War wounds. L. A. Allen, one of the first WT contributors agonized over what appears to have been sexual conduct at an early age. You meet people who thought they heard Jesus’ voice. You find names you’ve probably never heard and their biographies. This is not the candy-coated history the Watchtower Society writes.


They present the group as essentially disunited, the only unity being belief in the near return of Christ for judgment and to raise the saints. They take you to statements by the principals to show this. And this takes us to their premise, which put simply is that continuing fragmentation led (rather perversely) to a doctrinal unity and a distinct identity.


Volume one, the book just released, ends with the split between Barbour and Russell. Barbour embezzles money, seeing it as his right as God’s last days voice. Russell is seen as intellectually struggling.


You should read this book. You will be amazed. So, don’t let the title throw you off. You need to know what this book says. Their discussion of is especially important. would be disfellowshiped for his view of congregational authority.